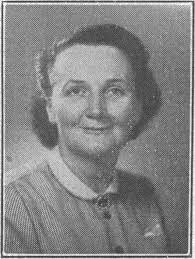 Charlotte Naish (1908 – 1959) spent much of her working life in York contributing to the development of medical services and knowledge.

Born to parents Lucy Naish, a lecturer in osteology, and Albert Ernest Naish, a professor of medicine, Charlotte was one of the first women to study at and receive a degree from Cambridge University.

A pioneer in research into breastfeeding, and into relationships between parents and their children, she was the author of numerous articles. In 1947 her book on breastfeeding was a prizewinner in the British Medical Association awards.

In 1948 she started what she called ‘an experiment in family practice’ holding a weekly clinic at her surgery for mothers and babies only. She also set up a fathers’ club.

In addition to her contributions in the medical field she was also an accomplished swimmer and racing car driver. She won the Yorkshire swimming championship in her youth, and was second driver and mechanic to Dr Janet Vaughan when they were the first British women to win the Ladies Cup in the 1932 Monte Carlo rally (in spite of losing an hour’s time when they stopped to attend to the victims of a road accident).

Mother to a family of three daughters and two adopted sons, she was a Quaker throughout her life and often spoke at meetings of the Society of Friends.

Find my Past database.