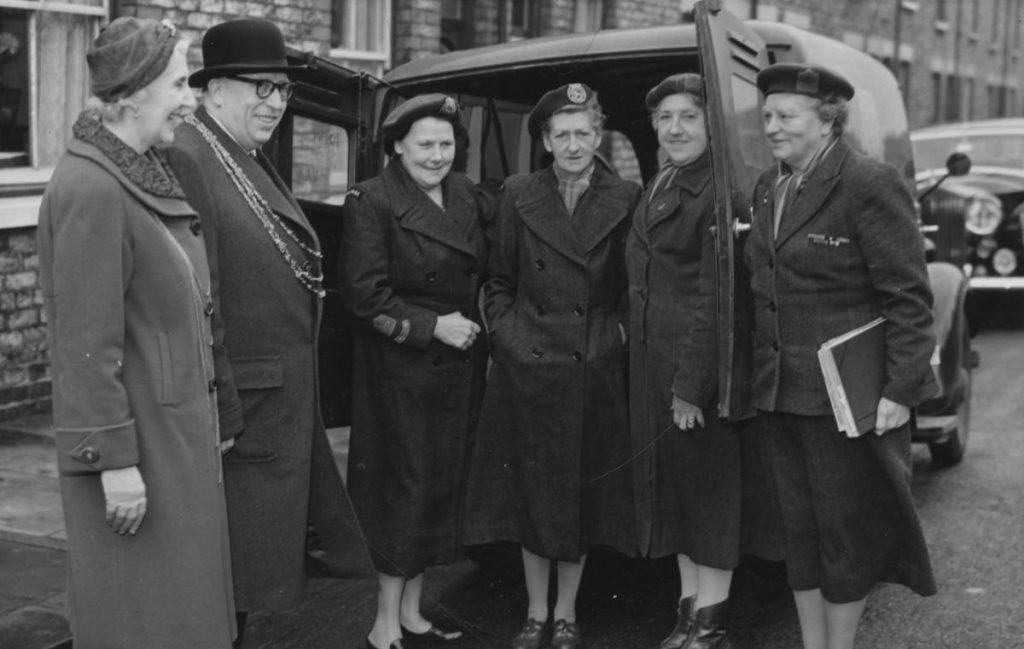 Florence Oloman on the left, next to her husband, Robert Oloman and women from the WVS Meals on Wheels team, 1959/60

Sophie Johnson’s book on Adoption in York from 1943 – 1974 gives a detailed account of the work of the York Adoption Society and of the pivotal role Florence Oloman played in it.

Florence is described as always independent and enterprising.  She joined the WRENS at 15 and then worked as a clerk at a solicitor’s office and became interested in the law. She married Robert Oloman and their joint interest in their work with deaf people led her to complete a course in Social Work at the London School of Economics.

The legal adoption of children was introduced in 1926 and in 1939 local authorities were given the option of becoming adoption agencies. The York Adoption Society began as a committee of the York Community Council in 1939 and in 1943 was registered as an adoption agency.  In 1945 the Society urgently needed a full time organiser and Florence Oloman was offered the job – ‘She was ideally qualified, with a social work training, experience as a legal secretary, a warm personality and an interest in children.’ (Johnson, S. 1997).  With a Mrs Farrar who was then Secretary, Florence laid the foundations of the work of the society. She started on a trial period of 3 months and stayed 21 years.

In 1950 the national Standing Conference of Societies Registered for Adoption (SCSRA) was inaugurated in London and Florence was a founder member and elected to the Executive Committee.  Her reports from such bodies as this were received with great interest by the Society and introduced it to wider horizons and perspectives.

Florence Oloman’s role grew and included interviewing mothers offering infants for adoption and matching them to adopters whose situation, religion and backgrounds were nearest to the mother’s wishes for her child.  The final decision was made by the Case Committee. The mothers’ trust in Florence encouraged them to keep in touch with her for help and advice and news of the child – and many did.

In 1966 Florence retired and Johnson comments, ‘When Mrs Oloman left, the Society lost a loyal supporter and friend and, more important, her wisdom and guidance.  The Society depended on her more than its members realised……Mrs Oloman had gained increasingly in authority and was, in many senses, “Director” of the Society.

From 1959 – 1960 Florence’s husband was Lord Mayor of York and Florence Lady Mayoress. Johnson notes that Florence was ‘a distinguished Lady Mayoress and a worthy representative of the Society.’