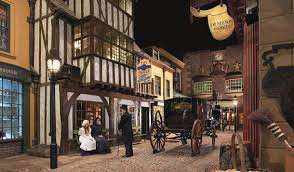 Florence Wright (1917 – 1991) was education officer at the Castle Museum and used to give informative, historical talks to groups of schoolchildren about 45 years ago.

She always dressed in grey, had her grey hair in a bun and “was a lovely woman who will always be remembered”.

The former Queen Anne prefect was something of a swot, went to university when females in academia were extremely rare and acquired a wealth of knowledge about York in Georgian times.

At the Castle Museum, Miss Wright would take a class of 35 to 40 noisy kids into a darkened room with rows of chairs where small children would be shown dozens of slides.

She was described as “a very clever woman who could make any subject sound fascinating to young, inquisitive minds.”

A former pupil of St George’s School in York described Florence as:”very scary indeed. She used to stand in front of the slide projector at Castle Museum which made her look very big. She would show us out past Pat, the museum’s massive bull.”

“For many years she taught at Knavesmire Secondary Modern School for Girls, Campleshon Road, and around 1950/51, she was appointed to the Castle Museum.

“We walked to the museum once a week for our history lesson, usually with a questionnaire to complete by finding the answers inside the museum. In those days it did not open in the morning”.

“We had full freedom to dash about and learn. Miss Wright was a very good artist; she always had a picture in coloured chalk on the chalkboard in her room. She was a great character”.

“What she didn’t know about the museum and about the history of York was not worth knowing”.