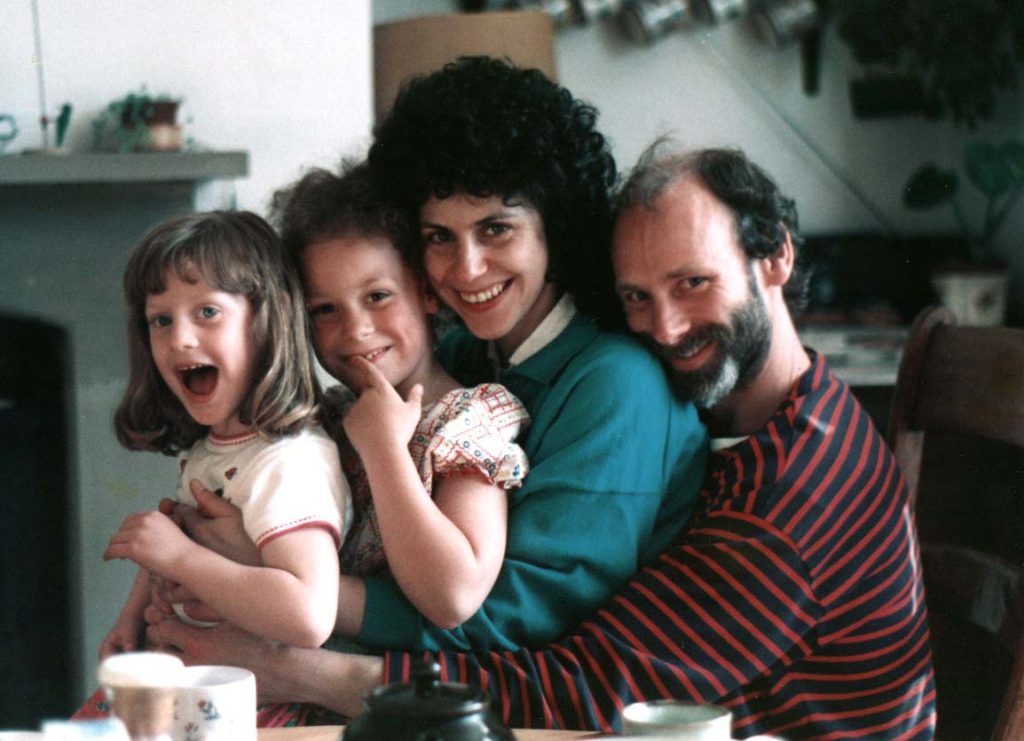 Lesley’s family were Jewish Refugees from Vienna. Her father was brought to England in the Kindertransport at the age of twelve and he was saved from the same fate as his parents who were killed in Auschwitz. Her grandmother was a concert pianist which may account for Lesley’s gift as a clarinettist. Lesley’s grandparents were Polish and not religious.

Lesley’s father was fostered in Liverpool, and then lived with an aunt who managed to escape to England. Her mother’s parents obtained permits to work as servants in Shropshire, which saved the family’s lives. When they could, they moved to Manchester, where Lesley grew up and went to school, moving on to The University of York as a student and then a teacher.

Lesley’s daughter, Jessie, the child of two professional musicians had lived a life steeped in music and even at the age of eight wanted to know when she could join a professional orchestra. She had frequently accompanied her parents on overseas tours with her sister Hannah, who was two years older.

Jessie was full of fun and mischief but also had an enormous inner strength which would come to be tested. Where Hannah loved to dance, Jessie learnt the violin, and later the piano. In mid November 1993, Jessie started to see two of everything but an optician assured the family that there was nothing wrong. Within a few days Jessie’s balance was uncertain and she was soon having dizzy spells. The doctor initially diagnosed labyrinthitis.

Returning to the doctor when there was no improvement, he made a referral to the paediatrician at York Hospital and they found an appointment in two days. Jessie was admitted to the hospital and quickly transferred to Leeds General Infirmary. That afternoon Lesley’s worst fears were confirmed with a diagnosis of a brain tumour which was inoperable. Jessica could barely walk and within a week started on a twice daily course of radiation for 23 days.

The radiotherapy resulted in an improvement in Jessie’s health. The tumour had shrunk and she was walking. The musicians’ community helped her parents financially in trying to fund treatment in New York. The paediatrician suggested visiting Martin’s House, the children’s hospice near Wetherby.   This suggestion was rejected by Lesley at first, and Jessie did improve enough to go on a few days’ holiday. Sadly, her improvement was only temporary and Jessie deteriorated and was admitted to Martin’s House.

The hospice and the welcome for Jessie dispelled Lesley’s preconceptions of a children’s hospice. They found it bright and cheery and providing care for all the family. Jessie became comfortable and tranquil. She made a special cake with the help of the care staff. Jessie continued to deteriorate and died in Lesley’s arms on 6th May 1994, less than a week after arriving at the hospice.

Jessie’s Fund was the name given to the money that her parents had received for help with her care. Her family wanted this to be put to good use. Lesley had found there was a constant buzz of sound in the hospice, but had not experienced any creative music-making. She felt sure that music could offer children a uniquely valuable form of self-expression and enjoyment, however complex their medical needs.

Setting up a charity was a steep learning curve for Lesley as it was outside her experience as a professional musician. Jessie’s Fund helps children with complex needs through music. Music is a powerful way to interact, particularly for children with communication difficulties.

Jessie’s Fund has established posts for music therapists in the majority of the UK’s 50 or so hospices for children; most of the children who they help cannot speak and music can be a vital means of communication. The Special Schools Programme gives children with special educational needs the chance to participate in music, make recordings and perform. Staff are trained in simple techniques for increasing musical activity in schools.

Jessie’s Fund has recently been on television in a BBC Lifeline Appeal and Maxine Peake, their Patron, was the presenter.

Sources: Interview with Lesley and Information from Jessie’s Fund. www.jessiesfund.org.uk