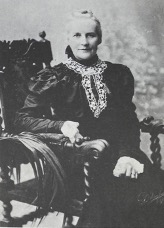 Mary Sessions (1841 – 1926) was married to William Sessions who died at the age of just 43 in 1886.  By then he had established himself in a printing business in York which he had bought in 1865.   When he died, Mary led the business until their son was of an age to take the helm.  This involved a transformative move to larger premises to accommodate bigger (and more modern) machinery and laid the foundations for the development of the specialism in label printing which set the course for the company for years to come.  Though she stepped down from the leadership role in 1897, she remained a director until 1919.  The book ‘Sessions of York and their printing forebears’ speaks of Mary’s ‘courageous enterprise and perseverance’ in carrying on the fortunes of the firm, for which she is ‘honoured and remembered’ (Sessions, William Ltd., 1985. p 27).

The son mentioned above, also called William, who was only eight when his father died, was eventually the father of yet another William, William Kaye Sessions, born 1915.  He joined the firm in 1938 and in due course became Managing Director. He married Ethelwyn Margaret Lidbetter (known as Margaret) and in 1950 she joined the board and remained a Director until her death in 1994.

She developed the sale of standard lines, mostly self- adhesive, sold through stationery, photographic and other resale channels.  She went on to work ‘energetically and thoughtfully on book planning mostly in the role of editing but occasionally as author’ (Sessions, William Ltd., 1985. p 43). The writer of ‘Sessions of York and their printing forebears’ speaks of the company’s appreciation of her contribution at board level and her impact on decision making alongside her organisational ability which benefitted the company enormously.  Margaret authored or co-authored the following books:

The Rowntrees of Riseborough: A genealogical description of the descendants of William and Hannah Rowntree of Riseborough. (1982)

The Tukes of York in the Seventeenth, Eighteenth and Nineteenth centuries. (1987)

Researched and written by Rosie Cantrell