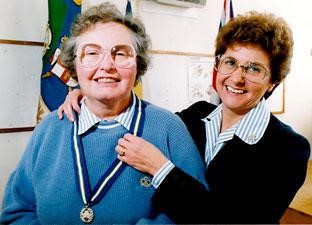 Mary York (1931 – 2010) was born in Maltby, South Yorkshire where she began her guiding life by joining the Brownies. She studied at Leeds University and while there was an active participant in the university Scout and Guide unit.

She became a Sea Ranger, before becoming a Guide leader in 1954 while she was a teacher at Hexham Grammar School, in Northumberland.

In 1958, she moved to York to take up the job of chemistry teacher at Mill Mount Grammar School – which later merged with Nunthorpe Grammar School to become Millthorpe School – and she taught there until she retired.

Mary, who lived in Acomb, was welcomed as ‘Captain’ – leader – of the  39th York Southlands Guide Unit where she served for 20 years until ill health forced her to stop running the unit.  She also helped a friend to run the 37th York Acomb Methodist Guide Unit.  Mary became a Guide Trainer so that she could pass on her skills to both adult leaders and the girls. One of her interests was the out of doors and she ran amazing camp programmes for the Guides, influencing and introducing others to the delights of living in tents and being self-sufficient.

Following her ‘retirement’ from running a unit Mary took on various roles with in the County;  she became a District Commissioner helping old and new Guiders with their units and ensuring they had the appropriate training and information to help them.

She was also the County Archivist and made a tremendous job of tracking down archives and documenting them.  Thanks to her there are records and log books dating back to the 1920’s, a wonderful record of not only the early days of Guiding in York but of social history.

In 1991 she was presented with the Laurel Award – one of Britain’s top guiding awards – in recognition of her service to guiding and the community.  The picture above shows her receiving the award from Pat Cliff, guiding commissioner for the North East of England.

Weeks before her death in 2010, at the age of 78, Mary was presented with a 50-year long service award by Girl Guiding North Yorkshire South.

‘She got on so well with everybody. I’ve spoken to people who were guides in her unit and they all say she was such a fantastic person, a very inspirational person.

She was full of fun and was very kind and approachable.

She gave an awful lot of her life to guiding and if you ever wanted to know anything about guiding in York you just picked up the phone to ring Mary.’

‘She was diagnosed with diabetes when she was 18 and refused to let it beat her, dealing with what could have been not quite a death sentence, but certainly a condition that was very limiting.’

In addition to her guiding work she was also a preacher at Southlands Methodist Church and  became Science and Technology Adviser for the county and the region.