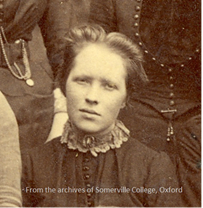 May Kendall, Writer and Researcher with B.S. Rowntree

May Kendall 4 December (1861 – 1943)  born in Bridlington, the youngest of four children of Rev. James Kendall, a Wesleyan minister and Eliza Goldworth Kendall.  The family moved frequently due to their father’s work but in 1890 when he retired, they settled in York. May remained in York after the deaths of her parents.

From 1887 to 1889 May studied Philosophy, Ethics and Literature at Somerville College, Oxford, but did not sit any exams.

May was a writer, with 39 pieces, mainly poems, published in Punch between 1885 and 1895, making her the second most prolific female Punch contributor of the nineteenth century. Her Punch contributions cover a range of subjects including science, spiritualism, art, literature, romantic relationships, and the New Woman.  Her poetry collections include Dreams to sell and Songs from Dreamland.   “Lay of the Trilobite,” is probably her most anthologized poem – a satire of the popular English response to Darwin’s evolutionary theory. She wrote novels, including That Very Mab (with Andrew Lang) and short stories and contributed to other periodicals as well.

In the twentieth century she concentrated on non-fiction, carrying out sociological investigations with B. Seebohm Rowntree and contributing to his books and articles, particularly How the Labourer Lives (1913).  She was acknowledged as a co-author of this book, for which she interviewed rural labourers’ wives about their finances and nutrition to highlight the inadequacy of labourers’ wages.

Although she was not credited as a co-author of Rowntree’s other books, she is known to have improved his language style in many publications, including The Human Needs of Labour (1918).  Her ability to tell stories made his writings far more readable.

May was an active socialist and a founding member of the York branch of the Fabian Society.

In older age May lived in Monkgate, York, and was known for her eccentricity.  She died aged 81 in 1943, in a public service institution.