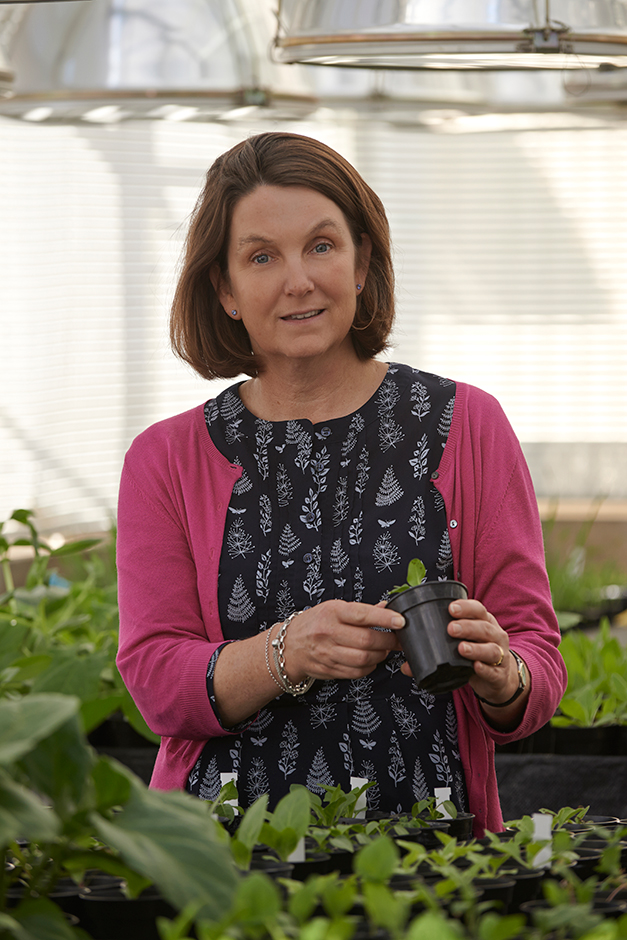 Nicola was born into a British forces family, her father being a Royal Airforce Officer. This meant she moved homes and schools every 2-3 years and this was the reason she went to The Mount School, York for her secondary education. Her time at The Mount started a lifelong love of, and association with York. She loved science and in particular, plants so after school she decided to study Botany at Durham University. The motivation was an interest in plants and gardening, but more fundamentally, a realisation that plants are some the most important things on the planet and should be valued and cared for. After graduating, Nicola gained an MSc in Microbiology at Birkbeck College, London and then began her career as a research plant pathologist, where she gained a PhD in plant virology and worked on virus diseases of horticultural crops in the UK and internationally for over 20 years, first in Warwickshire and then returning to York where she became Head of Plant Health then Chief Scientist at the Food and Environment Research Agency at Sand Hutton.

Nicola also spent four years as CEO at Science City York, working in partnership with City of York Council, regional businesses, further and higher education establishments, schools, and public sector organisations to drive growth in the regional science, technology, digital and media sectors, in particular investments in bioscience and digital technology at the University of York and York St John University. At the University of York, Nicola was also involved in starting an initiative call Biovale. This organisation drives the regional green economy, developing high value food, feed, fuel and medicines from plants. Biovale continues to grow and Nicola still takes a strong interest in the University of York and is a Member of Court.

The ash dieback crisis of 2012 drew Nicola back to plant health science and she became Defra’s Chief Plant Health Officer, advising ministers, industry and others about the risks posed by plant pests and diseases, ensuring that measures are in place to manage those risks and minimise their impact and leading the response to outbreaks of plant and tree pests and diseases. Nicola is still based in York, which is a thriving hub of environmental science and she loves combining living in Yorkshire with a high-profile job in Whitehall. She makes regular media appearances on BBC Radio 4’s Today programme, BBC Radio York and BBC Countryfile to talk about the importance of plant health.

Nicola is now a governor of The Mount School, York and loves giving something back to the school community. She is also Honorary Professor at the University of Birmingham and Visiting Professor at Harper Adams University, where she enjoys giving lectures and seminars. She is President Elect of the British Society for Plant Pathology and a Fellow of the Royal Society of Biology. Nicola is a Trustee of The Yorkshire Arboretum where she loves to volunteer and enjoy woodland walks.