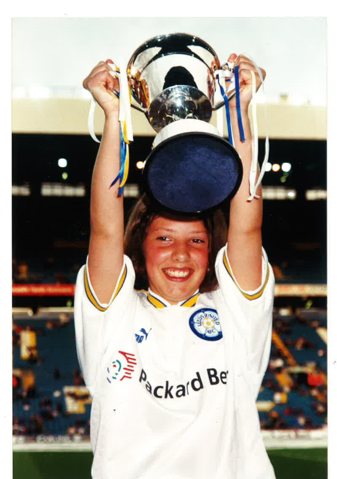 Amy was born in Sheffield in 1987 but from an early age was brought up in York.

At a party she was playing football with her friends when the father of one of her friends, spotting her talent, suggested she play at Doncaster Belles. At that time women’s teams were few and far between, but Leeds United had a team and that was nearer, so she went there for trials. She was successful and signed up, starting in Leeds Under 12’s and progressing right through to the women’s team reserves.

Achieving distinction in the National Diploma in Sport and Exercise Science at York College, she went on to Loughborough University and played in representative teams there. Amy played County football for Yorkshire (as well as County hockey) and with Leeds United won the League Cup and the League, as well as individual honours such as Players’ Player of the year and Manager’s Player of the Year.

Following university, Amy coached at soccer clubs in the USA during the summer, then worked at the Football Association’s North Yorkshire Girls Centre of Excellence, now a Regional Talent Club. Regional Talent Clubs are responsible for the delivery of elite girls’ football development. Since 2018 Amy has been working for York City Foundation running Walking Football sessions around the city, leading a ‘sporting memories’ weekly session encouraging those with dementia to reminisce and socialise through football, and running After School Clubs, holiday courses and lunch clubs. These activities aim to reach out to women and men of all ages and levels of ability to take part in football. The sessions take place across York in Burnholme, Wigginton, Haxby, and other city centre venues, and further afield in places such as Sheriff Hutton, Roecliffe. Amy is also leading on York City Foundation taking football into the women’s prison at Askham Grange.

Amy’s achievements in football as a player have been backed up by success as a Coach with some of those coached by her going on to play for England under 15’s and one going on to play for Manchester City. Longer term, she plans to take more coaching awards which would qualify her for professional league work.