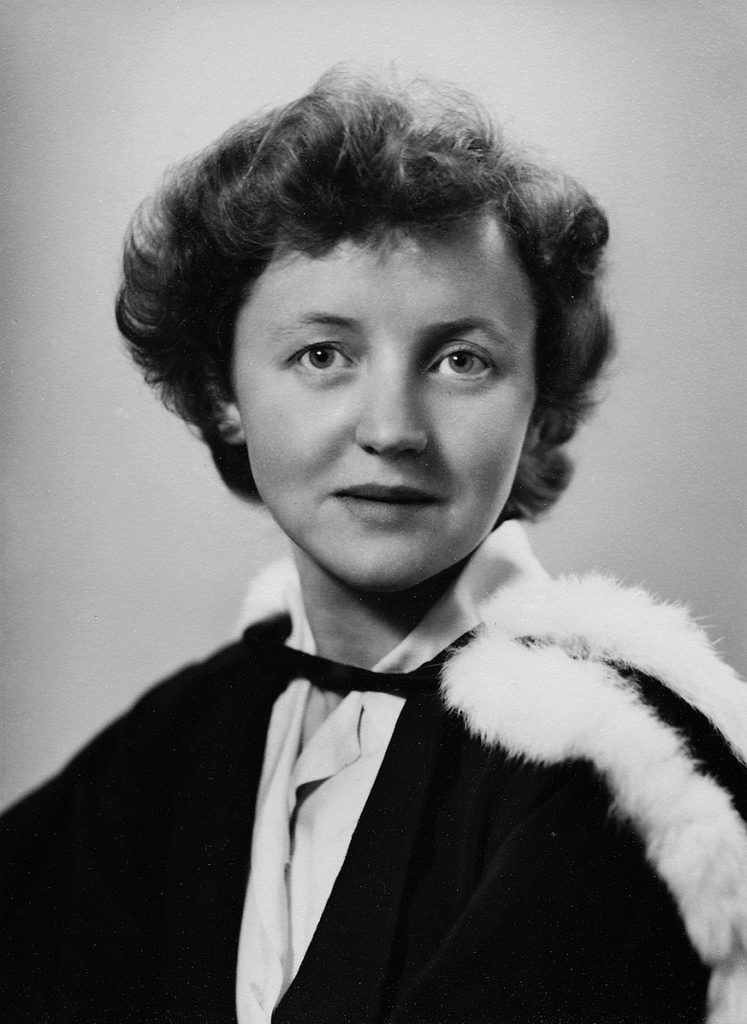 Brenda Swinbank (1929 – unknown) was born in Ackworth, West Yorkshire in 1929. She went to Hemsworth Grammar School where she excelled and achieved a place at Durham University to study Modern History in 1946.

In February 1947 she attended a Durham Historical Society meeting where Eric Burley, the university’s Reader in Archaeology, spoke with passion on Hadrian’s Wall. Brenda was enthralled.

Following the achievement of an upper second class degree, Brenda was awarded a Durham Colleges Research Studentship to do the work she had proposed in her undergraduate dissertation – researching the Vallum which runs to the south of the Wall and particularly, to better understand its purpose. She started by walking the 76 miles of the Wall so she could dispassionately examine the Vallum on her own. In 1950 she started writing up her work on the Wall and a second paper in 1951 was described as ‘a conceptual breakthrough’ by David Breeze.

There were no archaeology jobs at Durham University after the two years of Brenda’s studentship ended but she lectured at Hartlepool Further Education College and continued involvement in excavations at Corbridge.

In 1952 Brenda became a Latin and History teacher at Settle Girls High School but remained determined to continue her Archaeology. She worked on her thesis in any spare time alongside amateur dramatics and interestingly, a public speaking competition in which she expounded on the inequalities women faced ‘…the prime aim of any government should be to give women their position in society which is their due!’

In 1954 Brenda submitted her PhD thesis, ‘The Vallum Reconsidered (Research 1949 – 52)’. It was examined by Sir Mortimer Wheeler and she gained her PhD to the delight of the local Ackworth paper which noted the ‘brilliant young student’ who had reached ‘a new peak in her career’. Brenda was only the third British woman to be awarded a PhD on the archaeology of Britain.

Brenda was then offered a post as Assistant Lecturer in Archaeology at the University College of South Wales and Monmouthshire. Here she undertook more excavations and in 1958 was made a Fellow of the Society of Antiquaries. Again, the post was time limited and jobs in Archaeology were scarce as the subject was not established as a separate academic discipline at this time. Brenda therefore moved back to Ackworth as Assistant History mistress at the Friend’s school. Here she met Peter Heywood, an English teacher, and in 1959, married him. In 1960 the couple moved to Glossop in Derbyshire as Peter had been offered a job as Head of English at the grammar school. When the school merged with two secondary moderns, Peter started looking for another job. By now the couple had two boys, followed by a girl in 1967. The little girl, Penelope, had Down’s Syndrome and a hole in the heart. Brenda and Peter decided to move to York where the facilities for children with Downs’ Syndrome were better and also to be closer to other family members. Sadly Penelope died before the move took place. Peter got a job at Bootham School as Head of English and the family moved to Haxby on the outskirts of York.

In 1968, Peter Wenham, Head of History at St John’s College, York, asked Brenda to lecture on the Roman Britain course. She also took part in various digs including one on part of the fortress in York. She referred to the age old conflict of domestic concerns clashing with work interests – in a letter to a fellow archaeologist ‘I’m bogged down in gardening and spring-cleaning at the moment…I wish I had your powers of concentration – I should have my backlog of three reports out of the way in no time!’ In addition, she started helping Peter with the excavation of a Roman fort at Malton.

When Brenda attended a talk by Derek Phillips in 1973, a collaboration began which would have a lasting impact on the city. Derek was the archaeologist in charge of the excavations at York Minster from 1967 – 1973 and the result was rooms full of documents, photographs, soil samples and finds. It was a huge task to interpret the material. Brenda started working for him part time and in 1976 she became a full time research fellow working from 86 Micklegate.

Although working again as a professional archaeologist, Brenda was juggling domestic tasks alongside her work. In a distribution of tasks typical of the day, Brenda took on the majority of the work at home – cooking, housework, family finances, day-to-day gardening, transporting Gladys (her mother) and the children around, and keeping in touch with family and friends while Peter mowed the lawn, put petrol in the car and washed up.

In 1985 the second volume of the Minster Report was published with Derek stating, ‘…my colleague, Dr Brenda Heywood, has been a constant source of encouragement and very practical assistance, far beyond any reasonable call of duty.’ The first volume was published in 1995 and Richard Atkinson, Chair of the Excavation Committee wrote to Brenda of the magnitude of the task she had undertaken referring to it as ‘an unprecedented triumph.’

Brenda’s work on the Vallum was finally published in 2008 with a second paper completing the work in 2010.

In 2017 Brenda was sadly suffering from dementia.