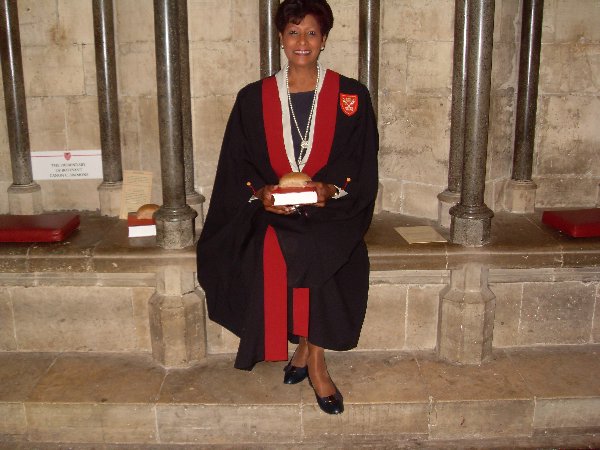 Linda Ali, born in Trinidad and Tobago, travelled to Britain in 1961 to study Beauty Therapy and Electrolysis. As a result of sustained discrimination, she decided to follow a different career path in Trade Marks management working in the City of London for over 30 years.

After a personal tragedy, Linda embraced education as her form of rehabilitation. In 1997 she arrived in York where she completed a BA (Hons) History/Education and Masters in History at the University of York. Through her studies she began to focus on ‘Black Presence in Britain’. This took the form of her MA Thesis titled ‘West Indian Nurses working in the National Health Service 1950s-1960s’.[1]

The National Archives then employed Linda to research and write for an online exhibition; this concentrated on how people of colour became a part of Britain as far back as the Roman Empire, and included evidence found in York. As an active member of the Set All Free[2]Executive 2005-2007, she helped to prepare the national resources and events for the 2007 Bicentenary Commemoration of the Abolition of the Slave Trade Act. This involved conducting a series of lectures across England, including York, and in Yorkshire, which was connected to the slave trade in many of its country houses, and because of the trade’s subsequent abolition, through the work of Yorkshire MP William Wilberforce.

Linda was also involved with the Centenary Commemorations of the WWI Armistice, in 2018, through a project titled ‘They Also Served’[3]and found that volunteers from the Colonies were recruited in centres around Britain, including York. Thus far, she has lectured on the subject in York, Sheffield and Oxford.

Linda’s connection with York was also as a volunteer at York District Hospital. For over 13 years she was a British Red Cross Skin Camouflage practitioner. She carried out this specialised work at the Dermatology Department of the hospital, treating hundreds of patients with all manner of skin conditions such as post-surgery scars, vitiligo, birth marks, hiding tattoos, etc. This was in addition to her work helping to manage two charities, one in London and one in York.

At present, dedicated to her Christian faith, Linda volunteers in many areas of the Church of England, and is one of the Lay representatives of York Diocese on General Synod. She was also appointed as a Lay Canon of York Minister. In this regard, Linda was nominated as a member of York’s Commonwealth diaspora to attend a reception at Buckingham Palace, in February 2018, where she was presented to Her Majesty, Queen Elizabeth, Head of the Commonwealth. In addition, on Holy Thursday 2018, Linda was appointed by the Archbishop of York to be one of 92 women involved in charity work in York, to receive the Maundy Money from Her Majesty in St George’s Chapel, Windsor.

PrevPrevious100 years after votes for women, these are the women who have helped change York (York Press)
NextSally Arnup, SculptorNext