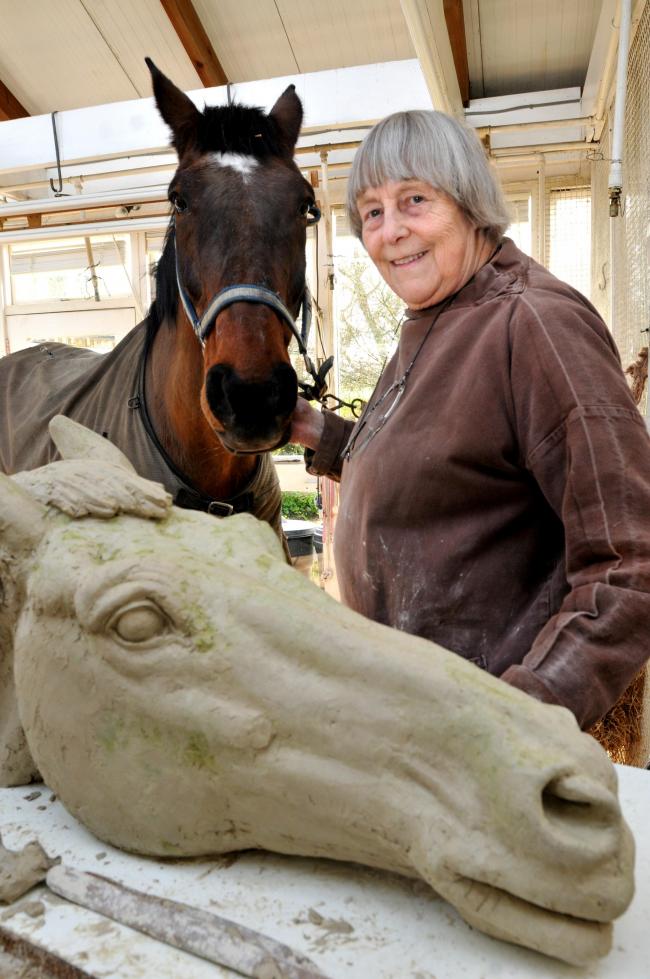 Sally Arnup was one of the world’s leading animal sculptors.She was born and brought up in Surrey. She remembered being handed a piece of clay at her Montessori School when she was about two and a half and enjoying the feel of it between her fingers. By the age of five, she had decided she wanted to be a sculptor and her parents let her take over a shed in their garden as a studio. At the young age of thirteen, Sally was allowed to attend Camberwell School of Art. And she later studied at the Royal College of Art in London, where she met Mick. They married in 1953.

In 1957 Mick and Sally moved north and took up posts at York Art School, where Sally taught sculpture, eventually becoming Head of Department. In 1959, they went to live in a bungalow in Holtby, which became the family home and studio. They stayed there for the rest of their lives.

Sally became well known for her animal sculptures, which she created from live animal models, rather than sketches or photos. She said it allowed her to capture the character of her subjects more accurately. So, they often had animals staying with them at Holtby, sometimes for several weeks. She worked initially in clay, and then made wax moulds, which were sent to a foundry to be cast in bronze. When the final pieces were returned to her, Sally would finish them by rubbing them down by hand to remove the rough edges

One piece that Sally made was rather different. After her daughter Rebecca, one of her four children, was born with serious health problems, Sally made a sculpture of a starving child. She was very conscious that there were many children in Africa dying of starvation and without access to the health care which her daughter had benefitted from. Shortly afterwards she and Mick set up a branch of OXFAM in York, organising book sales at the Friends Meeting House. When Sally got a free short-term tenancy for a shop, she opened the first charity shop in York. When Rebecca was five, the local authority told Sally it had no provision for the education of someone with such profound disabilities. Sally ran a campaign for better support, and the Fever Hospital at Yearsley Bridge was set up as a school for disabled children, later evolving into the Yearsley Bridge Centre, providing work and education for young people and adults with a learning disability.

In 1974 Sally and Mick both gave up teaching to concentrate on their artistic careers. Sally had been exhibiting regularly in York since 1968 and her reputation around the world was growing. Examples of her work on display in York include the bronze calf in the inner courtyard of King’s Manor, the hart at Hartrigg Oaks, as well as several pieces at York Art Gallery. Her commissions include a Silver Leopard given to HM the Queen in 1981 by the City of York.

Sally was always encouraging of her fellow artists, whether they were professional and well-established, or gifted amateurs just starting out. She died at York Hospital, aged 85. She suffered a stroke in a stable while she was modelling a large sculpture of a horse. Her Quaker Memorial Meeting held at Bootham School, was attended by more than 300 people, with between 20 and 30 speaking about Sally and her life. Sally is buried in the village churchyard at Holtby.