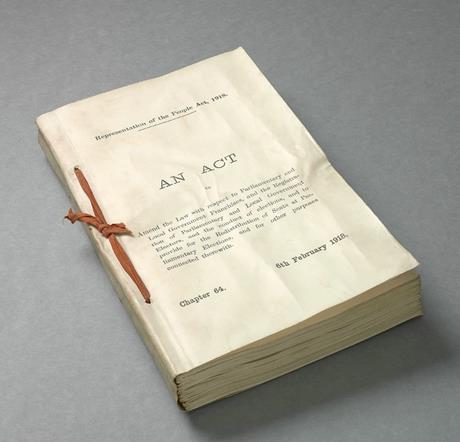 Harriet was born in 1881 to John and Harriet Turton at Birkin near Pontefract in South Yorkshire. She was one of six children. John was an agricultural labourer. In 1901 Harriet was living in Hunslet, Leeds and working as a shop keepers assistant. She married Fred Albert Fawcett in 1906 in York and by 1911 they were living in Lower Ebor Street with their daughter Edna.

Harriet became involved with the York Citizens Committee just before the First World War. This was set up on 7 August 1914. It consisted of Ward Committees, each composed of 25 people. Harriet was selected as Secretary of Bootham Ward. She was also a member of the Joint Employment Committee. The chief task of this committee initially was to set up work rooms for women at the beginning of the war.

The Queen had established the Work for Women’s Fund ‘to prevent distress to those women who have lost employment due to war’, which made funds available for this purpose. The first workroom was set up on 15 September 1914 at 3 Castlegate, but by 31 May 1915, most women had found work.

Harriet became a member of the National Federation of Women Workers in 1916. This was set up by Mary Macarthur in 1906 and Harriett became National Organiser in 1918. She worked so hard at recruiting in Newcastle that she had a breakdown and also lost her voice and was ordered to rest. She returned to the political scene in 1919, when she was elected to York Corporation as a Labour Councillor in May to serve for 3 years representing Micklegate Ward. At this time City Councils were not seen as overtly political bodies and Harriet did not get much support for her many campaigns to improve the lot of Working People. Her fellow female Councillor was Edna Crichton, who went on to become the first female Lord Mayor of York.

Her interests which followed on from her time on York Citizens Committee were Health and Employment, and also Education. She came from a background of poverty, but had the tenacity to educate herself and become a person of standing in her community. She was instrumental in setting up the work rooms for women during the first part of WW1 and in March 1920 chaired the first meeting of The Women’s Section of York Labour Party.

In peacetime she continued much of the work she had been involved with during the war. On 1 June 1920, after a paper presented by Mrs Mackereth of York Women’s Section entitled ‘Present Food Prices vs The Brand of Trade Returns’, Harriet moved to send a resolution to the Parliamentary Committee of the Party to ask where the people could purchase some of the goods mentioned at the price the board quoted.

At the same meeting Harriet raised the fact that rents were due to rise in York. She was a supporter of the Tenants Defence League and she thought that ‘we should be doing more in York on this matter’. She would raise the matter on the next evening at the Trades and Labour Council. If nothing was done, the Women’s section should take the matter in hand and ‘try to formulate a scheme for bringing the subject more prominently before the working class of the City’.

Mindful of her efforts to rehouse and employ many of the returned soldiers after the war, she moved the following motion for consideration by full Council at the 1 December meeting in 1919.

‘That the Corporation commence its own Brickyards and Workshops to supply materials necessary for building of cottages and alteration of any property purchased by the Corporation’.

This motion, after being referred to the Streets and Buildings Committee, was referred back to the full Council with the recommendation that the sub- committee could not recommend the scheme. It was eventually dismissed by full council.

Harriett was still active on the Federation of Working Women and attended the 1920 conference in the Albert Hall. Conference delegates debated the possibility of a merger with the National Union of General Workers, later to become the GMB. Many delegates expressed concerns that the Women’s Section of the NUGW would be in competition with the NFWW if this went ahead. Harriet reminded delegates that the oldest branches felt as if the Federation belonged to them ‘and of course they did not like parting with it’.

This sentence marks out the essence of Harriet. She never wanted to maintain the status quo, she was always striving for improvement in all walks of life. She said the merger was for the benefit of the Unions and not for anyone’s prestige.

On 1 January 1921 Mary Macarthur died at the age of 40 and Harriet did not seek re-election to York Council; instead she went to work for the movement that Mary had set up as organiser of the West Midlands branch of the NFWW, just before it amalgamated with the NUGW. She encouraged the self education of the Working Class through the Union. She said of herself ‘I can knit, tend cows and read at the same time’.

On 3 February 1930, at the Quarterly Meeting of Council, Alderman Dobie moved the deep regret of the Council for the death of Harriet Fawcett, one of the first Women Councillors of the City of York.