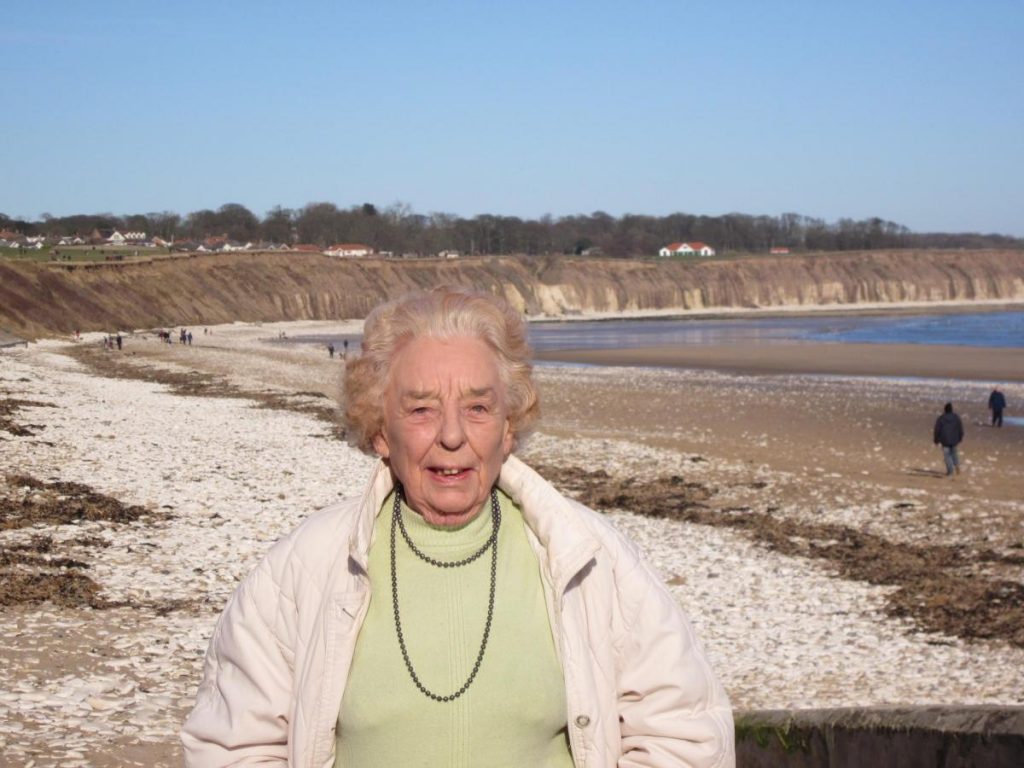 ‘A kind-hearted retired teacher well known in York for teaching generations of families in Clifton and Rawcliffe, and for her voluntary work to help others‘ (York Press)

Enid Marie Ord (nee Raine) was born in Burton Stone Lane, York on 28 January 1926. When Enid was a child the family moved to Bakewell in Derbyshire where her father was headmaster of a local school.  After leaving school she worked in the local post office as well as the famous original Bakewell Pudding Shop. Enid served in the Women’s Land Army during WW2. The family returned to York when she was 23.

Post-war there was a shortage of teachers so Enid went to City of Sheffield Training College to become a primary school teacher and during her time there she met and later married Roy Ord in 1952. They moved to live in Clifton, York. Initially Enid taught at Heworth CofE School for a while before moving to Burdyke Infant School (now Burton Green Primary School) for the main part of her career, ultimately becoming Deputy Head, until she took early retirement.

As a young couple, Enid and Roy enjoyed motorcycling and she rode her own Lambretta. They organised motorbike and car events for York Eboracum Motor Club, and Enid helped promote the sport to women as well as men. She took part in competitions in her car and won trophies.

Very community minded, she was a founder member of York Geology Club which thrived for over 35 years offering outings, field trips and talks on the geology of the UK. She acquired a vast collection of minerals, rocks and fossils. Enid became one of the first women members of Skelton Park Golf Club and soon began winning trophies. She delivered Meals on Wheels for the WRVS. In 1970 Enid joined the National Trust and assisted the York group in arranging study holidays in the UK and abroad.

Enid played the piano and had been a music teacher at Burdyke Infant School. Upon retirement from teaching she regularly attended sessions playing the piano for patients in Clifton Hospital until it closed. She then volunteered in the Library at the Retreat Hospital which included rummaging around charity shops to buy books for their stock which she thoroughly enjoyed.

In 1990 Enid became an active member of the newly formed Friends of Rawcliffe Meadows nature reserve group where she helped with planting trees and digging the new pond.

Enid adored live shows and The Joseph Rowntree Theatre was her favourite venue for plays, musicals, light opera and their annual pantomime. She would often recognise ex-pupils performing on the stage and to her delight they still recognised her!

Although Enid could not swim she began canoeing in her late 70’s enjoying many fun adventures with her daughter and grandson at Allerthorpe Lake.

There is no doubt that Enid lived life to the full right up to her sudden death in 2014 at the age of 88.