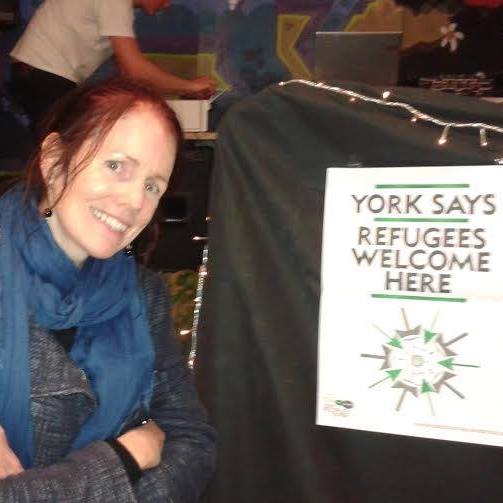 Esme Madill, born in 1966, lived in York for nineteen years (1999-2018). A passionate campaigner on behalf of refugees she co- founded Refugee Action York in 2002. RAY has had a huge impact on the lives of asylum seekers in the city.

Esme said: “I was drawn to working with refugees and asylum seekers because I was acutely aware that whether you are a refugee or not is an accident of birth, and nothing more “

Born in south London in 1966 and brought up by a mother who believed wholeheartedly in her her daughter’s ability to do well, Esme was educated at Cambridge and the LSE. She began her career as a social worker and first met refugees when working in London with African women affected by HIV. Esme discovered that for some of them fears about their uncertain immigration status was greater than their fear of AIDS.

Her involvement with HIV projects continued after she moved to York. She was at the time mother of two young daughters. It was through a fellow mother at her daughters’ toddler group that she met a Kurdish refugee from Turkey and then a wider Kurdish refugee community. They were living without any support.

Esme contacted the Labour MP for York Central Hugh Bayley, for help. He tabled a written question in Parliament. The answer confirmed the Home Office had placed a small number of refugee families in the City and Esme was able to use her fund raising skills to establish Refugee Action York. The organisation aimed to challenge misconceptions about refugees and asylum seekers and raise awareness of the contribution they make to our society.

Refugee Action York is now the leading organisation supporting asylum seekers in North Yorkshire. It runs a Drop in Centre and Youth Club where people can learn English and new skills, take part in drama and football, share food and receive help to rebuild their lives.

Work for a range of organisations like the Stephen Lawrence Trust and Comic Relief took Esme away from York a couple of times a week. It was when she was helping a community project in East London that she became aware of the plight of Albanian refugees and in 2004 became involved with the Shpresa Programme. Shpresa campaigns against modern slavery and has developed services for trafficked women and children.

Young people from Albania are the third largest group of unaccompanied asylum-seeking children in the UK, but their prospects are particularly bleak Although fleeing criminal gangs, violence and blood feuds, the dangers they face are not understood. The majority are refused asylum, many disappearing into modern slavery. In 2019 Esme helped launch a new initiative Breaking the Chains (www.the.justice.gap/all-my-days-esme-madill) to raise awareness and influence policy making

Good legal advice can really help a refugee’s asylum claim. The difficulty of finding good lawyers led Esme to retrain as an immigration lawyer herself. She graduated with merit from the College of Law in York in 2010 and gained her Legal Practice Certificate with merit from Leeds Beckett University in 2015. .

Esme was a trustee of RAY until 2015. In 2018 she moved back to London. She now works with the Migrant and Refugee Children’s unit at Islington Law Centre .