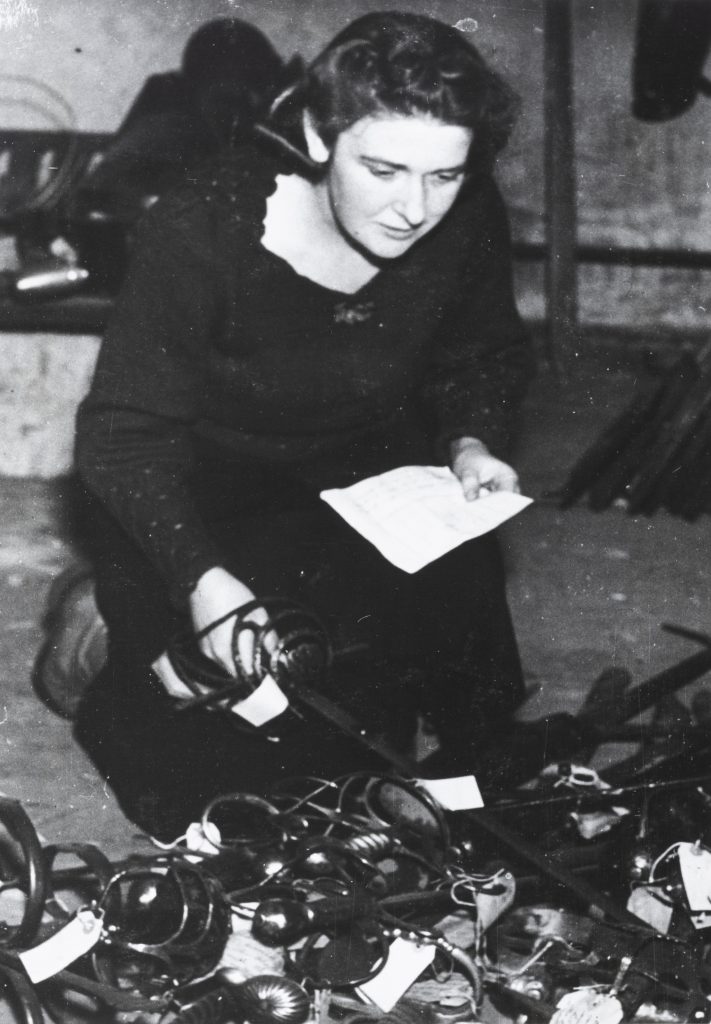 Violet Rodgers Wloch (1914-1978) was born in Bradford and began working for Dr John Lamplugh Kirk in 1938, age 24. Dr Kirk, of Pickering was an avid collector of ‘bygones’, and whose vision was to show objects in their original context. His collection, opened as York Castle Museum in 1938, has since been visited by over 32 million people.

Violet said, ‘When I came in 1938 the doctor was beginning to get rather uneasy. He had a weak heart and a wary eye on the progress of Hitler. In almost his first conversation with me he said “I’m going to die soon, girl, and there’s going to be a war. If I don’t get my museum opened first it will never be opened. We’ve got to hurry!”‘

Violet described Dr Kirk as ‘[…] a fierce-looking old gentleman, tall and thin, with white hair standing on end, and a large white moustache. He was a wonderful employer. He would just leave me with a pile of things to sort out; catalogue, repair and then fix the smaller things with wire on wall panels, ready for display in York, as all this was done in Pickering at his house. About three times a week he took all the things which were ready to York.’ Despite Dr Kirk’s concerns, the museum successfully opened to immediate praise on 23 April 1938.

It is not clear how Dr Kirk and Violet met or how she came to work for him, but in January 1938 Kirk wrote to J. B. Morrell (a fellow collector and supporter of Kirk’s vision) that ‘Miss Rodgers is promising’ and requested that she be paid £1 a week ‘until such time as your committee can confirm her status’. Dr Kirk died in 1940 and Violet ran the museum during the Second World War and into the late 1940s as Deputy Curator, making a huge contribution to the development of the museum. She expanded the educational service and developed an interactive approach to the collections, allowing visitors to handle objects.

Despite achieving the Museums Association Diploma (one of the first women to do so) and effectively being in charge of the entire museum during the war, Violet was not paid the same as a male equivalent.

In 1942 Violet took on additional wartime work and joined the Royal Observer Corps in addition to her museum duties.

After the war, Violet was forced to take a pay cut because a new male curator was appointed. She married Wladyslaw Wloch in June 1947 and the couple held their wedding reception on Kirkgate. That same year, Violet left the museum for a new life in Poland. She became a Curator at the Historical Museum of Krakow and was awarded the Polish Cross of Merit for her work.

She and Wladyslaw had three children, Irena, Halina and Lydia and the family moved back to York in 1960. Violet died here in June 1978 aged 64.

Yorkshire Post, ‘Inside the Yorkshire museum founded on one man’s obsessive collecting’, 21 April 2018