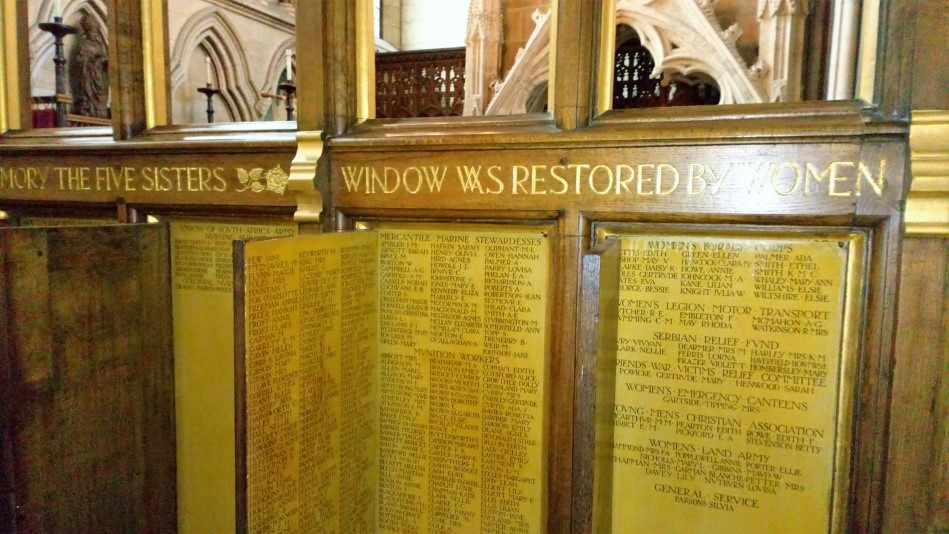 Helen Drage Beckwith (1872 – 1933) was born in Winchester, Hampshire, the daughter of a clergyman.  She had an older sister who died aged two in 1872 and a younger sister who died aged four in 1878.  In 1933 when she died probate records refer to her brother, Arthur Thackeray Beckwith, who was then a retired Brigadier.

In 1899 she married Charles Little in Winchester and in 1901 the census shows them as living in St Aubyn, Devonport where Charles was stationed as a Major of Infantry.

Helen Little’s contribution to York’s history is the restoration of the Five Sisters’ Window in the Minster following its removal to avoid damage from zeppelins in the First World War. The story of how this came about is both colourful and moving. Helen herself told the tale in a letter she requested be sent to The Times after her death, in 1933.

This is the letter:

Sir, during the early part of the war I was present when the train loads of wounded arrived at Cairo from Gallipoli, and was witness to the untiring devotion under great difficulties of the nurses and other women who gave themselves up, entirely regardless of their own health, in some cases with fatal results, to alleviate the suffering of the men. After the war was over, when memorials on all sides were being erected to our brothers, I often thought that our sisters who also made the same sacrifice appeared to have been forgotten.

Ever since my first entrance into York Minster in 1909, the Five Sisters’ window in its quaint simplicity, quiet dignity and lofty purity has appealed to me irresistibly. On November 30, 1922 I had the following vision:

I was going into evensong and entered by the south transept door as usual. Just as I reached the choir door in the dim light I saw two little figures in white standing hand-in-hand in the middle of the north transept: one beckoning to me, the other pointing upwards to the window. I moved towards them, and then recognised my two little sisters, both of whom had died as children. As I followed the little pointing finger I saw the window move slowly backwards as if on hinges, revealing the most exquisite garden with wondrous flowers I have never seen before. In the midst of the garden was a great tree under which were five women sat weaving. In the distance at the bottom of the garden a stream flowed, and a number of girls and women appeared by it and came gliding up the garden in misty grey- blue garments. They came nearer and nearer, when suddenly the window swung slowly bark, blotting out the garden. I looked down and saw that both my little sisters were pointing upwards to the window. I had arisen in my sleep, and was standing when I woke, and cried out, my words being heard by my husband: “The Sisters’ window for the sisters”.

Under the window is the stone memorial :

SACRED TO THE MEMORY OF THE WOMEN OF

THE EMPIRE WHO GAVE THEIR LIVES IN THE EUROPEAN

The names of 1,400 women are inscribed on oak screens adjacent to the window on the north side of St Nicholas’ Chapel.

Over the names is the inscription:

The memorial was unveiled on 24 June 1925 at a ceremony attended by the Duchess of York and the Archbishop of York which highlighted similarities between male and female service and sacrifice. While the Duke of York unveiled to York municipal war memorial erected to the men of York killed in the war, the Duchess of York did the same for the Five Sisters’ window memorial in the minster. The Duke of York inspected troops and addressed veterans; the Duchess of York inspected guards of honour composed of 70 female the VADs of the North Riding of Yorkshire British Red Cross Society and 50 girl guides. Cosmo Lang, Archbishop of York said in his address,  ‘Through (the window’s) pure and delicate colours there now shines and will ever shine the light of service and self- sacrifice which ennobled the women of our land and Empire in the dark days of the Great War’

The British Journal of Nursing.  April 1934