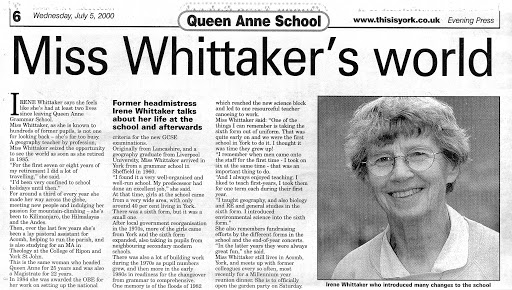 Irene Whittaker (1923-2010) was from Lancashire and went to Liverpool University where she graduated in Geography. She became Head of Queen Anne Grammar School in York in 1960, after teaching Geography at a grammar school in Sheffield.  She remained Head of Queen Anne’s for 25 years and oversaw the expansion of the school with increasing numbers in the 1970s and early 80s, then its transition from grammar school to comprehensive.

She co-chaired the Joint Council for National Criteria for the GCSE exam and she was a driving force behind the design of the 16-plus examination, which was introduced to schools in 1986.  In 1984, she was awarded the Order of the British Empire for her outstanding contribution to the development of school examinations.

When Queen Anne School was closed and the property was sold to neighbouring St Peter’s School in 2000, Irene helped run a trust which raised £15,000 for teenage pupils in York.  In 1972, she was appointed a Justice of the Peace and over 23 years in that role at York Magistrates’ Court, she gave judgement on thousands of cases. She was a member of the betting, gambling and licensing committee as well as the family panel.

After her retirement Miss Whittaker became a lay pastoral assistant for Acomb, helping to run the parish and she studied for an MA in Theology at the College of Ripon and York St John.  She also volunteered with the Samaritans and raised awareness of aid projects in Ethiopia.

In July 2000, Queen Anne School closed and a final garden party was held which 1,200 past and present pupils, teachers and parents attended.  Irene Whittaker opened proceedings and said, ‘We’re here to celebrate, not to mourn. What we’re celebrating is 90 years of education in this place which is a great credit to the City of York.’  Irene’s leadership in the education provided at Queen Anne’s is clear, alongside her contribution to the other spheres of life outlined above.