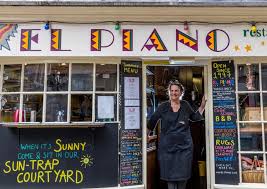 Magdalena (1953 – ) ran El Piano, a vegan and gluten free restaurant in Grape Lane, York. As a coeliac, I knew that it was safe for me to eat everything on the menu and I ate there many times. In addition, she organised several events for the local Coeliac UK group including cookery demonstrations and food tastings she did not charge for and made us feel very welcome because she wanted to “give something back to the community”..

Magdalena was born Roanne Sikking in California, USA and describes herself as an “abandoned child of mixed heritage, (White/Native American)” Her parents were teenagers and her father more or less disappeared before she was born. She was adopted when she was two and a half years old by a US GI and his British war bride who moved to the UK shortly after. She was then fostered out to a family in Coventry and had an itinerant childhood living in the UK, USA, France, Germany and Sri Lanka, attending more than four primary and eight secondary schools. Magdalena told me that her “ropey start in life during these formative years provided a wide experience of life” She has maintained life long connections with both her British families.

Whilst living and working in London, she wanted to apply for a grant to enable her to study Philosophy at York University as a mature student but was unsure whether she would qualify because there was a rule that stated applicants needed to have been in full time employment for three years. Although she had been, she was unsure whether this rule included or excluded non UK nationals. Ken Livingstone was the leader of the then GLC and Magdalena decided, with “the hubris of youth”, to go and ask him personally; she sat outside his office for a full day whilst people, including him, came and went. Finally, he barked at his secretary “What’s she still doing here?” The the secretary explained; Ken looked at Magdalena and barked again “Oh for God’s sake, give the girl an education” before disappearing into an office. “And that’s how I got the grant” she recalls, “Thank you, Ken Livingstone”.

Magdalena obtained her degree at York in the late 1970s. Not long after, she became a founder member of the Gillygate Wholefood Bakery, which then moved to Millers Yard, Gillygate in 1982. She moved to West Yorkshire and began working with the European Commission. She made use of her language and management skills to prepare and co-ordinate funding proposals, manage transnational projects and implement IT strategies for “structural funding areas in the UK, Greece, Norway, and Spain”.

In 1997, she returned to York and opened El Piano, York’s first Vegan restaurant and preferred to say that she ate “a plant based diet” rather than describe herself as a vegan. “In those days , ‘vegan’ sounded like a character from Star Trek, (Vulcans of course)”. She says “When someone says ‘I am vegan’, it is a declaration of identity and can be divisive. To say ‘I eat a plant based diet’ is merely information”.

Magdalena’s early life experiences meant that she knew what it was like to feel marginalised and in order to enable people to feel included, developed a menu that catered for “the least common denominator” with dishes that were plant based and free from gluten and nuts. She also believes that following a plant based diet encourages people to become aware of animal welfare and climate change. As the impact of palm oil and refined sugar on people’s health and the environment became more widely known, these were also eliminated from El Piano’s dishes and they used organic and locally sourced ingredients. El Piano became the first restaurant in the world to gain international palm oil free accreditation from POFCOP.

El Piano was a family affair and Magdalena’s four children and as many as nine family members worked in the cafe over the years. El Piano opened in Granada in 2007 with a satellite in the Realejo district in 2009 and a kiosk in Malaga in 2010. In 2018, after “ more than 21 years of blazing the vegan and gluten-free trail. Magdalena is happy that almost all eateries in York, and indeed across the UK are now offering vegan and gluten-free option. She felt that it was a good moment to bow out. El Piano Granada continues to this day in the Realejo area of the city, owned by Inma Marchena.

A core team from El Piano continues in Scotland with publishing company “SP SQUARE”. In addition to publishing “21 Years Free”, El Piano cookbook, they publish an annual anthology “Vegan Tales” which contains contributions on vegan themes from all over the world. They also provide classes in food education, similar to those offered by El Piano and also food training for institutions e.g. residential care homes.

In Magdalena’s words, “El Piano permitted us to roll out an entire system of values within a tiny bubble: respect, equality and generosity. Despite attacks from landlords, government, and the occasional member of the public, we were able to maintain our little bubble where these values thrived. Judging from the many messages from former customers and former staff, this was important to more people than we realised. Looking back over the decades of El Piano in York and beyond that to the early years of my life, I would say that on the whole, the big stuff is noticed. Yet the truth is that every small thing matters. Everything we do has an impact. We have more control than we know.”