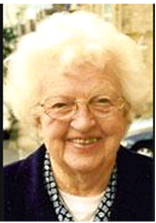 Nellie Buckley (1914 – 2008) was born in 1914 in Southlands, York and died age 94 on 18 April 2008.  She was baptised at Southlands Methodist Church and her funeral was held there.  Her involvement in the Church gave her the opportunity to volunteer for the Guiding movement, a commitment which she pursued throughout her life.  Nellie’s interests also included music and for ten years she ran a Young Church band at Southlands.

In 1931, Nellie and three other members of the Young Ladies Class at Southlands were asked by the Church Leaders’ meeting to look into the possibility of starting Brownies and Guides. She was involved in the launch of the Guide Company at Southlands more than 76 years ago and eventually took charge of the Guides at the Church, remaining in office until 1951.

From 1943 until 1951, she also ran a Ranger Unit. Over the years her main jobs with the Guide movement included spells as Division Commissioner (12 years), Camp Adviser for North-East England (ten years) and Arts Adviser for North-East England (five years). She took parties abroad, organised and helped with large international camps, acted as an observer at a world conference and ran a Guide unit at Fulford Cross for children with disabilities. For four years, she also ran a cadet company responsible for the training of young leaders.

In 1960, Nellie received one of Guiding’s highest honours when she was presented with the Beaver Award for good service to the Guide movement. As late as 2001, she was North Yorkshire County Guides president.

In her professional life Nellie was a teacher, serving in York as deputy head at both St Barnabas and Carr Infant Schools.  She was head teacher at Burdyke Infant School and at Woodthorpe Infant School, the role from which she retired.

She lived through two wars and recalled having to sit under the stairs at home during an air raid in the First World War. In the Second World War, St Barnabas School was a centre for those who had lost their homes. This meant that, for some time, she had to teach three classes per room.

She lived independently until the last 18 months of her life when she moved into residential care in York.