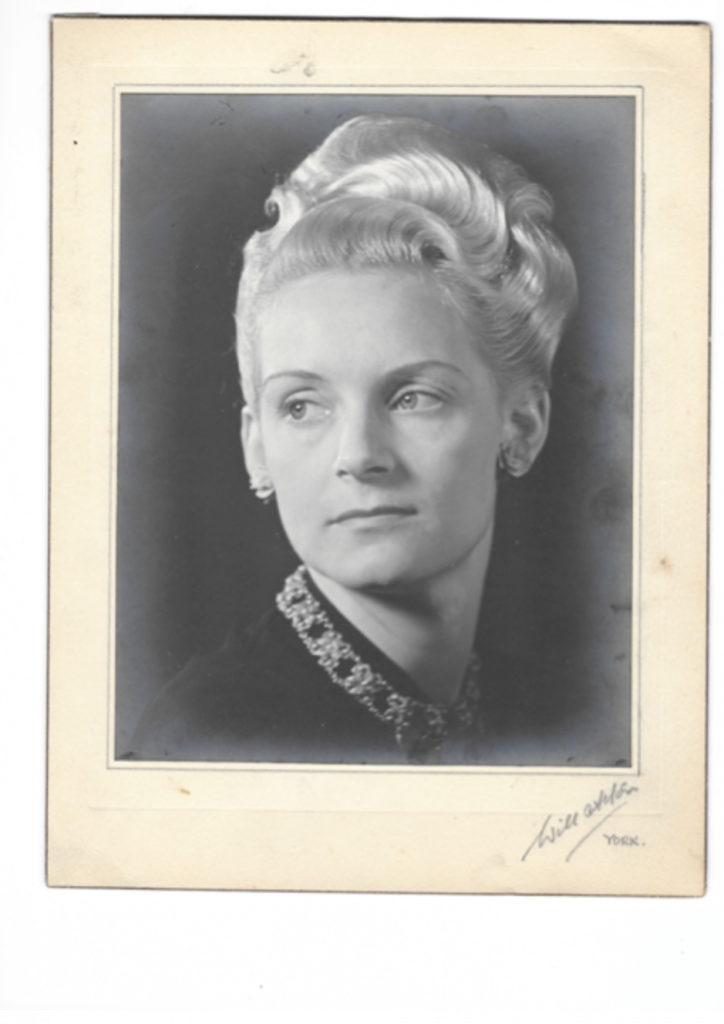 Dorothy (Dolly) Cooper (nee McGrath), was born on 21 May 1921.  She had 6 siblings. Her parents both died of tuberculosis by the time she was 17 years old.

Dolly went to Mill Mount Grammar school. Had the family been able to afford the £2.00 entry fee, Dolly would have sat for the Civil Service exams, but it was unaffordable, and Dolly joined Joseph Rowntrees, working in the wages department.  She enlisted in the RAF in 1940 but was invalided out due to TB, returning to work at Rowntrees. Dolly was a very good-looking young woman and modelled for Cairns Hairdressers.

In 1946 Dolly renewed an acquaintance with Kenneth (“Ken”) Cooper, recently returned from the Far East where he had been imprisoned in the Changi prisoner of war camp. She married him in 1947.  She had (at least) 3 pregnancies and suffered one late miscarriage. A daughter died in infancy. Her son, Andrew, unexpectedly died of pneumonia at the age of 30 in 1984.

Dolly and Ken were both members of York Labour party. Ken (as Councillor for Bootham Ward) served as leader of the Labour Group. They were both instrumental in re-establishing the Labour Party in York after the war and active in party life for over 40 years.  She and Ken built up York’s links with Munster in Germany.

Dolly qualified as a teacher in the early 1960s, and worked at Carr Junior School for 20 years. She served on North Yorkshire County Council as a co-opted member of the Education Committee. Dolly was Lady Mayoress in 1984-5 and Lady Sherrif in 1996-7 and 1988-9.

Dolly was a member of, and very active in, many York-based organisations, amongst others the York Trade Union Council, the Scouts, Sure Start, the Jane Wright Charity;  for her work with the Scouts she received the Queen’s Scout medal.

Dolly was a great friend, guide and mentor to many. She and Ken were adopted as grandparents by (at least) two families, one in York and one from Munster. She is described as highly intelligent, sharp, funny, articulate and opinionated.  Above all her interests lay with young people, their education and welfare and she went on making friends with young people to the end of her life.