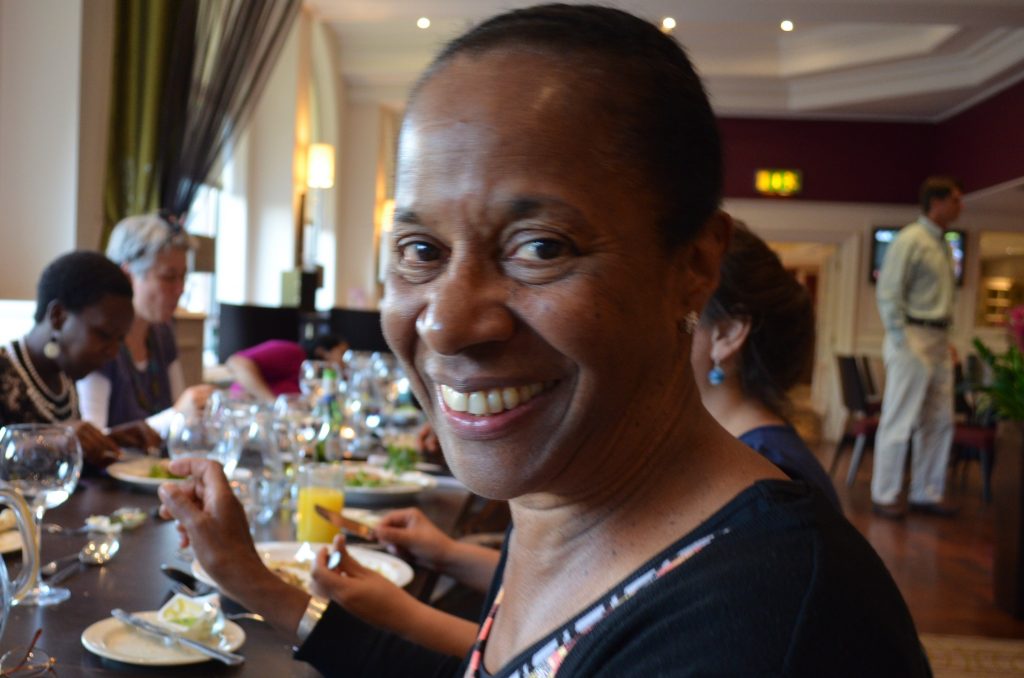 Throughout her life, Jenny Zobel (1946 – 2018) never failed to connect with her ancestors. In her own words “I wanted the portrait of my parents that hangs on the wall of my flat to act as a magic portal to transport me to the world of my ancestors.”

Jenny was born in 1946 on the French-speaking island of Martinique and moved to France in 1947 with her mother and her two brothers, to join her father. The family settled into French life and her father; Joseph Zobel, began to be recognised as a unique literary voice. He was a source of inspiration throughout Jenny’s life.

The family moved to Dakar in Senegal, and Jenny thrived in the bustling cultural milieu there. The Zobel family home became a haven for writers, artists and dancers. She met Aimé Césaire, Birago Diop and Leopold Senghor.

Jenny moved to England in 1976 to start her career in the World Service as one of the first women of colour to work at the BBC.

Jenny, her husband and new daughter moved to North Wales. Jenny embraced country life in Wales and learnt Welsh as well as continuing with her career at the BBC producing plays and music programmes. In 1994 she moved to Harlech and became a lecturer in Radio Studies at Harlech College. She helped countless students to find their path in life.

Jenny came to York in 2003 to work at York College and became well-known through her excellent public speaking with YREN (York Racial Equality Network), focussing on issues which were important to the diverse communities in York. She became an associate of the Centre for Global Education (CGE) at York St John University shortly after and brought to the Centre’s team her experiences and insights and contributed to building and strengthening inclusive communities.

Jenny worked at CGE on a range of influential projects with both young people in schools, teachers, and those who had come to York from abroad.

When CGE developed an activity-based project analysing the effects of the Media, Jenny’s experience at the BBC was instrumental in creating tools and activities for teachers. That same creativity saw her invited to join the Board of the Theatre Royal where she participated in the ‘Take Over Festival’ aimed at young people. Jenny developed African and Caribbean art, literature and history initiatives in York and helped to set up a travelling exhibition for schools about York’s connection with African enslavement.

Another project at CGE: Hidden Stories and Inclusive Communities, included 20 York participants from wide ranging ethnic backgrounds. The work with some of these participants led to an initiative with Playback Theatre to perform their stories to an invited audience of York residents. One of these was an 8-year-old boy from a local school who said, ‘I think people should treat one another as they would like to be treated’.

In addition to her inspiring work for CGE, Jenny also worked with YUMI (York Unifying and Multicultural Initiative). With Jenny’s skilled support, people from many different parts of the world who had settled in York were able to recognise the importance of their personal stories to the community. Jenny helped them build the confidence to tell those stories, first to small groups and then to a wider local audience.

Jenny was one of four Caribbean women who met regularly to share their food and writing which reconnected them to their respective islands. Jenny was a constant flame of creativity through storytelling, performing, her cooking and most of all her friendship. That flame was dimmed with her passing.

Towards the end of her life, in 2018, Jenny wrote that ‘after so many departures in my life, I found a sense of belonging in this country: I’ve worked hard, I have many friends and connections, I’ve become a mother and a grandmother. I’ve put down roots. ‘I was thinking the other day that when the time comes, I’ll be happy to leave this world. I have contributed to my society and also created a beautiful family. I’d be sad to leave my children and grandchildren, of course, but I’ll be leaving a lot of myself within them. I know they’ll remember Mum/Mamie Jenny with love; my French accent, my ways of doing things, my cuddles and my stories.’

****At the time of the project in 2014, York’s ethnically diverse community represented 11% of the population, from over 92 ethnic origins and spoke 78 languages.