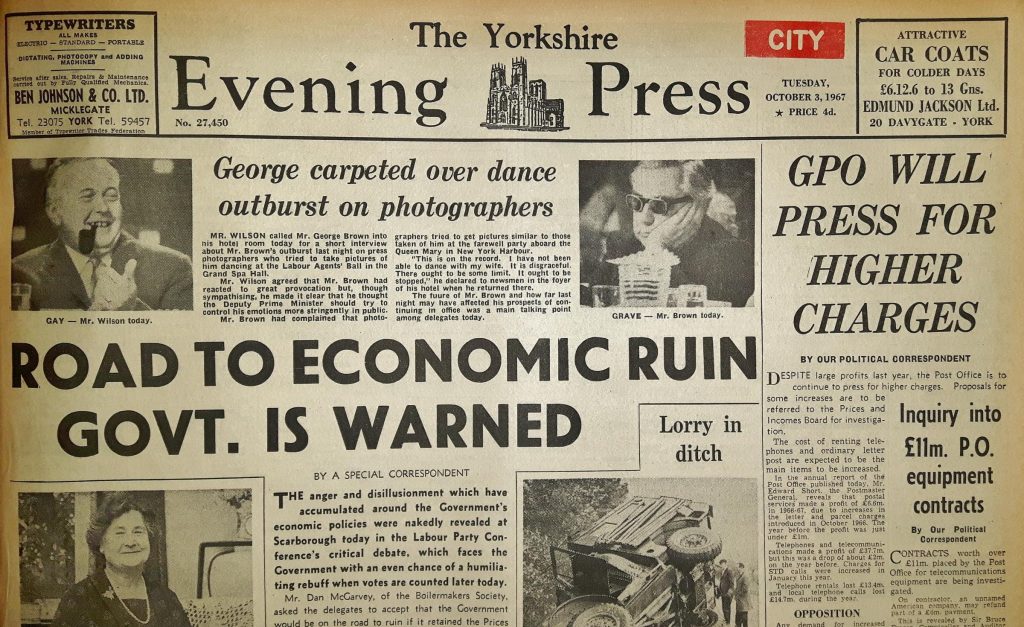 Mona Armitage was the youngest of eleven children and her father was a furnace man. Born in Wallsend, Tyneside, she recalled that a day trip to York as a child left her with a lasting impression of a ‘fairy-tale city’.

When she left commercial college in Newcastle she came to live with a sister in York. Another sister, who had been a maid at the Mansion House, used to enthrall her with stories of balls and dinner, and the civic plate gleaming on the tables.

Always interested in politics, by the time she was 59 she had been a city councillor for 14 years while working as a Welfare Officer at Ben Johnson, the Printers, on Micklegate. On 3 October 1967 the local newspaper reported that a ‘HOUSEWIFE WILL BE NEXT LORD MAYOR’ (photo of Mona bottom left of picture). She was only the third woman to be Lord Mayor in about 700 years.

As Lord Mayor, Mona said that a highlight of her year was the Christmas Cheer Fund entertainment for up to 500 old residents of an area of York that had been cleared for rebuilding, many of whom had been life-long friends and were now separated.

She was known for the warmth of her personality and as a witty public speaker. In her role, she welcomed many to the city. Whilst waiting with the television presenter, Alan Whicker, for HRH Prince Phillip to arrive with the naturalist, Peter Scott, for a dinner, he asked if she was all right. “Petrified” was her reply. She later admitted that the Prince put her at her ease, almost too much so, for she found herself calling him ‘pet’ in an unguarded moment.

‘Lords of the City: The Lord Mayors of York and their Mansion House’ by Charles Knightly and Rachel Semlyen. Published by York City Council 1980.