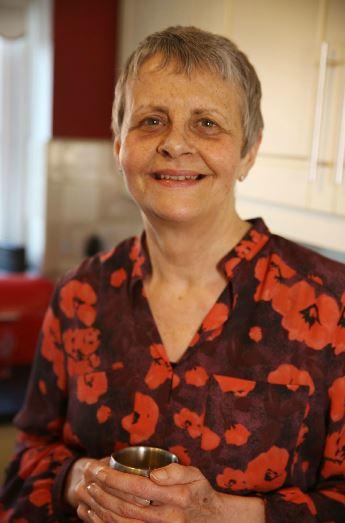 At the age of 56, Wendy was enjoying living by the river in York and her job in charge of a team preparing the Nursing rotas at St James’s Hospital, Leeds.  She had raised her two daughters as a single parent and they were now settled and independent. She was fit and active, enjoyed running, DIY, going on holidays and she had an active social life. She couldn’t understand the feeling that had recently come over her. It felt like a black mist descending, a head full of cotton wool.

She had days when she was unable to remember how to work her computer at work or how to drive her car. Initial tests suggested Wendy might have early onset Dementia, but the final diagnosis would take a year. Wendy was struck by the lack of support offered to her and looked on the internet. The Alzheimer’s society website had lots of information, including stories by people just like her. It helped her to understand more about the disease and the problems she might encounter if the diagnosis was confirmed.

Then in July 2014, aged 58, she went for the tests that finally confirmed her diagnosis. When she left the neurologist’s office, she was offered no follow-up. Wendy was on her own with support from her daughters, although she was determined that they would not become her carers and that she would remain as independent as possible for as long as possible.

Wendy had always been extremely well organised and she thought about how she could use these skills to manage her condition. She set alarms on her ipad to remind herself about appointments, important dates and to prompt her to take her medication. She used post-it notes on cupboard doors to remind her what was inside and she went through her photos, writing names and places on the back and put them on her walls to create a memory room. She wrote a living will, explaining all her wishes for her future care and giving her daughters Power of Attorney.

Shocked by the lack of awareness about the condition, Wendy volunteered to train as a Dementia Friend in York. People training with her had many reasons for attending but as she talked to the group, she realised that as someone with dementia she was dispelling many myths about the condition. She was at the beginning of a journey and didn’t know where it was going to take her but she still had a lot to contribute and ideas and opinions to express.

Wendy hoped to be able to carry on working for as long as possible, but she needed to do more and more preparation at home to keep up. When she couldn’t understand the new computer system which was about to be implemented, she decided it was time to speak to her manager and ask him to refer her to occupational health for support. She was hoping they would offer ideas to help her adapt her role and strategies so she could continue to work. Their suggestion of early retirement was not the answer she wanted.

Instead she decided to run a Dementia awareness session for her team and share her diagnosis with them. They were shocked but quickly came up with ideas to help her carry on and she started to share with them all the information she stored in her head.

Wendy didn’t set out to become a spokeswoman for people living with dementia, but she quickly become one. She started a blog – ‘Which me am I today?’ to help her remember the things she was doing, to inform family and friends of her condition and to help people who were living with Dementia to see how she was coping. Through the Alzheimer’s Society she attended media training in London and when she finally retired in March 2015, she found she was busier than ever speaking at conferences, appearing on television and writing articles. Travelling was a challenge, but once again her organisational skills came in very useful.  She researched her journeys thoroughly, printing out train timetables and photos of buildings she would encounter on her route around the cities she visited to orientate herself.

At conferences, she was often introduced as someone suffering from Dementia. She was keen to challenge this and explained she was living with Dementia and that diagnosis shouldn’t be seen as the end.

She attended a Dementia café in York and was involved in discussions to make York a Dementia friendly city and would encourage anyone who is diagnosed to join some of the groups that have sprung up in the city recently, as she sees the support of peers valuable in helping people cope with their diagnosis.

When ‘Still Alice’ a film about someone living with dementia was made she was asked to review the film for the Alzheimer’s Society and she was invited to the premiere in London where she met the star Julia Roberts. When Julia received a BAFTA for her role, she mentioned Wendy in her acceptance speech saying what an inspiration she was.

Wendy is quoted in her book as saying, “I used to be a really private person and it’s only because I was so shocked at the lack of awareness and the lack of understanding there was around dementia that I decided to speak out, I actually don’t like all the publicity. It’s not me. If it’s the only way to raise awareness then that’s what I’ll do.”